Arabnet, the Arabnet Digital Summit, that is taking place from 27 to 31 March has released their full agenda for the conference. And I believe it's a great chance for women to participate in.

Here's a small background for you about me, which few people know (or I had the time to tell it). Back in the days - when we used to still call "Sciences Générales" as "Mathelem - Mathematiques Elementaires", which was my pick for my last year in school, few girls actually chose that option. I remember we were only two in my class among 30 other boys. At 17, this is what you call guys!


The previous year, I had a Math teacher who despised people in general, and women in particular. Or so it was the impression he gave us. I am not a mathematical genius. But I loved math, most of its sections, mostly space geometry, trigonometry and algebra. First exam I did in Bac I (before last school year), I got 1/2 over 20. The highest grade was 8 over 20. It's because that teacher, some might know him, Mr. Rbeiz (Sagesse Saint Maron School), was so strict that he wouldt grant zero points even if you only did one small mistake in the exercise.

Women don't have the capability to comprehend Math
By the end of the year I got 16/20, and I think it's because I missed doing one exercise. I remember, a couple of weeks before that, he was asking us what our pick for the next year would be, we were 7 girls in the class, among 30. Our choices were: "Mathelem, Science ex and Philo".

Do note, that many times when he wanted things to be solved fast in class, he would pick me to solve them on the board. Anyway, when I told him my choice, which was Mathelem, he made it clear that it will be hard for me. While, he said "good choice" for the guy in front of me who had... let's just say, very modest intelligence.

Sexism #1. First time I felt it loud and clear. 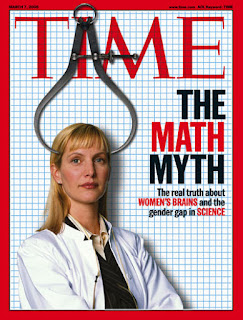 So I chose Mathelem despite him and just to show him! And I passed, from the first round, with an above average result (again I am not a genius, and I hate studying)

He used to say that he studied math at the Faculty of Sciences in the Lebanese University, which reputation of being difficult to pass precedes it by miles. But I think he never made it, or just made the first year.

Women can't analyze
Long story short, I picked Math as my major, and passed the first 2 years of pure mathematics (somehow easily I might add). And then, after two years (the system has changed now by the way) they give us a choice to remain in pure mathematics or pick Applied Math on Computer Science, being inspired by my older brother and being a computer fan since I was 10 (since computers had a 2MB hard disk), I went for Computer Science (good career choice by the way, I have professional doors opening for me all the time).

In my graduate studies, I was either the only girl or one of two in my class. I had the highest grades most of the time. Again, I repeat, I am not a genius nor I work that hard.

Women can't program
I worked as a programmer for almost 7 years. You should have seen the amount of times people told me: "Women cannot program". I did my friend, I did, and did a pretty good job, because it is simply based on logic. And if you understood the term "Factorization" back in 8th grade very well, then programming is a piece of cake.

Women like pink dresses, men like black iPads
Right now, I know about tech and this saga quite more than many men I know. Mish la2anno ana awiye, I just like it and I am interested in it and keep reading about it.

What I am trying to say is, our brains are not "built" to know how to cook, or to know how to drift a car, or to have spatial orientation, or understand A instead of B (same goes to men). The simple obstacles that prevent us from studying this or that, is us, and the people who tell us, no you can't.

So ladies, if you want to go tech, do it. Nothing biological prevents you to :), it's only in your head and your surroundings. Stop waiting for encouragement, just do it. But if you insist, here you go.

The reason why you still see more men than women in tech, it's the culture, the behavior, the way we get raised and we raise, and the girls section vs boys section in the toy stores.

What you can do in Arabnet?
Meanwhile, Arabnet is a great source of networking, learning, sharing knowledge, and seeing what the future can hold for you in terms of potential projects and initiatives. So let us participate, let us talk and be more active. Not because 3eib, but because we simply can and we should. This earth needs balance, Lebanon needs balance. Let's make it happen.