Socotra: The land of the Dragon Blood Tree and other wonders

Being in Socotra felt like everyone almost knew each other, running into people you met along the way on top of some mountain hiking under the sun or having the daily dinner at the local restaurant in Hadibo catching up on the news about the "guy" who is walking the whole island. As it turns out, this guy is Hichame Moubarak, a philanthropist that was walking / running around the island during that week to help raise money for local schools in Yemen. You can find more about his story here.
When I came back from Socotra, I got a lot of questions about it as people are quite interested in visiting, so here's the low down and all the details you need:
Budget: Around 2,650$ per person including everything (flights, visa, accommodation, food, guide & driver)
Flight:
From the UAE, there currently exists one weekly direct flight from Abu Dhabi to Socotra, operated by Air Arabia. It cannot be booked directly, you will need to book through an agency. We booked through an agency called Find Socotra who were very responsive and supportive.
Accommodation:
In general, you can camp all over Socotra for the duration of the trip, you can also request to stay in a hotel for some or all nights, all options are actually feasible. If you decide to be in a hotel the whole trip, you will miss on some night camping experiences, and this also means some more back and forth driving given that hotels are only available in the capital Hadibo. There is also only a handful number of hotels in Hadibo.
We opted to do a mix of camping and hotel, mainly because the weather has gotten hot & humid when we were there, and frankly, the ground is rough to sleep on, a lot of small rocks.
Recommended Duration:
We went for a full week (8 days, 7 nights), and I did feel that there was a lot of downtime, thus why it is actually possible to drive back every day to the capital and stay at a hotel. The things we did can easily be packed into 3-4 days, however I this case, I think camping would be more ideal as it would then allow you to move faster between destinations.
I will share below my thoughts on Socotra, as a lot of people have Socotra on their bucket list, mainly because of the rare Dragon Blood Tree, however, and in all honesty, I think 8 days is too much for this location, especially if you are going around shoulder season when the weather is not actually at its best, and there isn't much you can do during this downtime, even swimming as the sun is quite strong. My recommendation would be to wait until there is a second flight per week, so your trip would be 4-5 days instead.

Itinerary:
The below is the itinerary we did. There are some situation where you need to do certain things back to back due to their proximity to each other and depending on the camping spot, however, we ran into different groups all the time and it was noticeable that different groups had different order of things to do.

Should you visit Socotra:
Many people asked me about safety in Socotra. In terms of general security, it felt quite safe, there was also nothing close to pickpocketing, we really felt secure leaving our bags far from us. Granted our driver and guide were always around, which also made me feel super safe on a gender level. And I saw several women traveling solo around the island, certainly accompanied by a driver and / or guide. However, I can’t say if it is safe if you’re on your own (no guide / driver), especially as a woman and I don’t think that’s even possible yet, given that the flights are chartered and you need an official travel agency to help you book it, no car rental in sight, and lots of areas are not covered by network so no way to get around without the help of an expert local.
As I mentioned earlier, 7 nights / 8 days felt too long, and once there's a second flight allowing a 5 day trip, I believe this would be a better option. At the top of the post, I also mentioned the cost, but I really am unable to justify why it’s this expensive given how cheap the country itself is. So for that same price, you can easily get 5 days in the 5* hotel in the Maldives for example. Of course, Socotra is a wonderful place to visit, a place that reminds you of what it's like to live a basic life that is quite close to nature, and this is something everyone should experience, I just hope that with time it becomes more affordable.
Favorite experience:
We had a booking to have lunch at the one and only caveman (or hermit?) of Socotra. He's actually known as the Hermit of Socotra island. His name is Ellai. He fishes by hand and cooks and serves food in his cave, where different tourist groups visit him. We had seafood and rice for lunch (rice was cooked by his wife) followed by tea made on fire that he made himself. I really enjoyed this experience, he's quite a talkative character, each person who visits him gets a version of his life story, we learned about the number of kids he had, his wife, and how when he was still a child, his pregnant mom who was also living in the cave, went to the sea to fish, but came back with a newborn baby!
He served us mussels, fish, and calamari, and honestly the freshness and taste were so good. The view from the cave is fantastic, and the tea was just very filling.

Socotri Words to know:
Big shoutout to our wonderful driver / cook Wael and guide Mohammed for taking really good care of us. 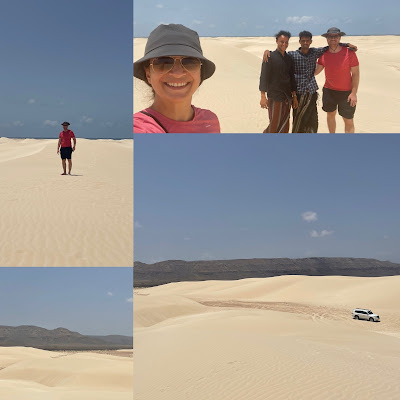