Layover turned into a 5 hour exploration of Belgrade

With Air Serbia becoming more and more popular as an airline in general, and in particular from Beirut as it's one of the few airlines that links us to Europe for affordable prices, the layovers in Belgrade Airport in some cases are long, the airport is still small and limited in what it can offer. There was maybe 2 places where we can eat and few duty free shops. Our layover was over 7 hours, so we thought it would be worth going out and exploring the city. Only caveat here was that we left the airport around 7AM, given that the city center is barely 15 minutes away from the airport and costs around 16€, we got to the center quite early where the shops and restaurants were still closed.


What kind of visa do you need to enter Serbia?

Obviously the Serbian one, as well as the Schengen, and US Visa. A weird coincidence happened with my friends, they were allowed in Serbia the first time around on a Croatian visa, but not the second time, so maybe you can try your luck if you were in this situation.

Belgrade on the path to becoming a hot destination

Belgrade right now is probably still on the low and is still not yet a big tourist destination. It seems though that this will change over the years as so far given the big investment made by Serbia (€20 Million) in projects improving and expanding their facilities (including Nicola Tesla airport). As well as Etihad's recent acquisition of Air Serbia.


The Serbian aviation industry is entering a new era. The number of people traveling to the Southeast European destination and its thriving capital has multiplied since 2013, when Etihad acquired a 49% stake in the nation’s struggling flag carrier JAT Airways, rebranding it as Air Serbia and introducing a wealth of new routes that have elevated the country’s air transport industry to new plains. Source: Airport Business.


It's very impressive to see a country build towards a fruitful future.

What I noticed during our short walk in the city center, was shops and restaurants starting to open around 8-8:30AM. Most cities would still be asleep at this time, so it's quite impressive to see that people are up early to get things going, this shows perseverance and hard work.

I wish I had enough time to visit the Aeronautical Museum in Belgrade, it's actually right beside the airport (3 minutes walk), so it's quite funny how we didn't end up making it.

The museum also displays wreckage of a downed USAF F-117 Nighthawk and F-16 Fighting Falcon, both shot down during the NATO bombing of Yugoslavia in 1999. Source: Wikipedia

The city is quite pleasant, large beautiful parks, and the view over the Danube was quite impressive. On top of all that, the city is still cheap. We had a fulfilling breakfast, and it cost us 6$ per person (this is including a drink, juice or coffee / tea).

On that note, I can't say this is the best breakfast place in Belgrade because it's the only place I tried, but I think it's a must visit because of the decor. The place is called "Boutique No2"

The history of Belgrade dates back to at least 7000 BC. One of the largest prehistoric cultures of Europe, the Vinča culture, evolved from the Belgrade area in the 6th millennium BC.

Serbia withheld a lot of wars and occupants.


Serbia achieved its current borders after World War II, when it became a federal unit within the Socialist Federal Republic of Yugoslavia. After the dissolution of Yugoslavia in a series of wars in the 1990s, Serbia once again became an independent state on 5 June 2006, following the breakup of a short-lived union with Montenegro. (Source: Wikipedia)

Putting all seriousness and history aside, there was a lot of artistic expressions on the walls of the buildings in Belgrade.

Belgrade is Beograd in Serbian. From Slavic words beli or beo, means white and grad means city or town. It was named after the white wall of the fortress that enclosed the city.

We made it to the fortress where we had to walk through a park. In the park there was a Saturday market. Belgrade Fortress is located on top of the 125.5-meter high ending ridge of the Šumadija geological bar. The cliff-like ridge overlooks the Great War Island and the confluence of the Sava river into the Danube, and makes one of the most beautiful natural lookouts in Belgrade. It borders the neighborhoods of Dorćol, Stari Grad and Kosančićev Venac (Source: Wikipedia).


"The upper town with its castle was defending the city from inland. Belgrade remained in Serbian hands for almost a century. After the Despot's death in 1427 it had to be returned to Hungary. An attempt by Sultan Mehmed II to conquer the fortress was prevented by Janos Hunyadi in 1456 (Siege of Belgrade), saving Hungary from Ottoman dominion for 70 years."

Should you fly Air Serbia?

Yes! We flew from Beirut to Dubrovnik (a bit less than 3 hours) and Dubrovnik to Belgrade. Unlike typical budget airlines, they did actually serve us free food in this short 50 minutes flight. I thought this is really generous on their behalf as between take off and landing, there is only around 10 minutes for service. The serving consisted of a small paper bag that contained a small water bottle and a sandwich. You can also specify preferred type of meals (vegetarian, low calorie etc..) pre-flight. 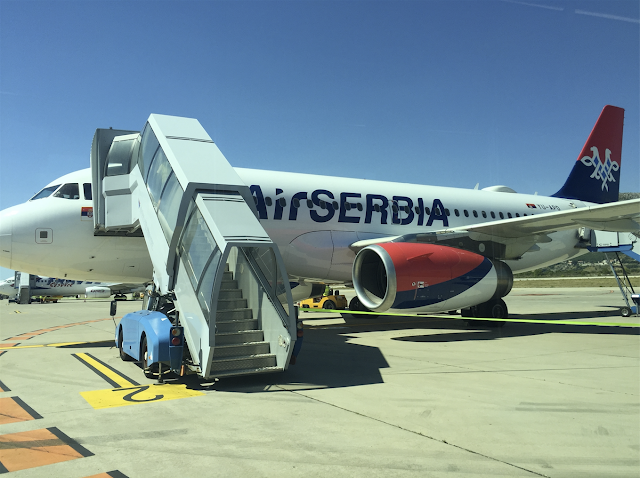