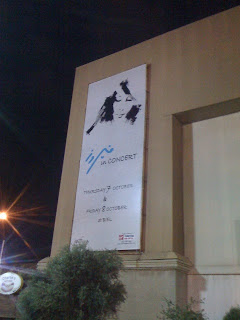 Fairuz in Concert
With an orchestra of 27 musicians (violin, oud, drums, guitar, flute, saxophone, etc…), the very talented Michel Fadel on Piano, the Maestro, 10 in the chorus, and the white glowing Fairuz blew our heads away yesterday in Biel - Beirut.

A dream come true
I have always had a dream to see Fairuz live in concert, and Fairuz rarely ever has concerts in Lebanon, and only abroad and that always pissed me off. Once she came on stage after the orchestra mesmerized us with a beautiful music anticipating her entrance, everyone stood up… simple intuitive reaction. That’s what I did. Of course, an old man poked me asking me to sit down, I ignored him.. after the whole cheering finished, I turned back and said: "That’s Fairuz eh?"

Repertoire
She started with “Sallimleh 3alei”, and then… I did not see it coming so soon, she sang my ultimate favorite, a song which Ziad Rahbani composed for her “kifak inta”… I kept pinching myself thinking I was in a dream… It was simply.. majestic.

She sang 3oudak Rannan, Allah Kbir, Al ayil.. and a few songs from her new album such as “Eh fi amal”. This album, is exclusively available at the doors in Biel and will be available starting next week in the markets. I got myself the new album of course. And certainly, she came for an encore. 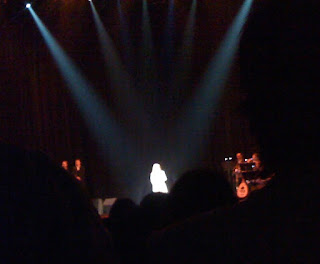 God sent
Fairuz in her white sparkly dress, with strong light always directed at her, she looked like she was God sent.

Fairuz is a DIVA... please media, use the word DIVA with caution and don't overuse it.

Diverse audience
Many celebrities and few politicians were present. One of them was Adel Imam, I was at a 6  meters proximity from him, as soon as he came in, everyone greeted and applauded. He arrived early, unlike many other Lebanese attendees (Please arrive early from now on?). Anyway, Adel Imam looked very welcoming and smiling. Great guy.

Also it seems like, many came from abroad, mostly from the neighboring countries and the gulf.

But where was Ziad?
Sadly, Ziad Rahbani wasn’t on the piano, they’re saying he was sick… Ziad Rahbani also cancelled his Beiteddine concert earlier in 2010 summer, I don’t know if he is still sick since then, if that’s the case… then… I hope he gets better soon, we need (want, are dying) to see him alive and kicking in his concerts again.

Strict rules and regulations
Phones, Cameras and Cigarettes weren’t allowed, which was a bit annoying (not for the cigarettes though :P). Some people did sneak them in, such as myself, but I couldn’t get good photos sadly.

Fairuz, thank you.. you made thousands of people happy last night.

p.s. People going tonight, make sure you get her to do a second encore! We only got one (Audience a bit pappazé). So yell, scream, woooo!!!