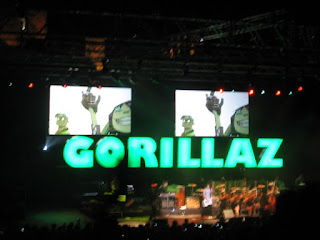 Gorillaz
Even though I was not the biggest fan of Gorillaz, as soon as I heard that they were coming to Lebanon, I knew I had to see them and it would be a one time experience/opportunity thing. This is not just any rock or jazz band, it's Gorillaz!!!! 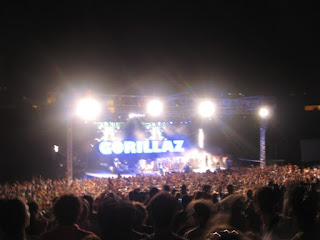 Their performance
The alternative rock, electronic, indie, hip hop, pop, rap... band seriously rocked the stage on Tuesday July 20 in Byblos. It was beautiful, even though a short performance with no "encore" :( , the vibes were amazing, and I cannot stress on how exhilarating it is to see the huge letters forming the band's name GORILLAZ in the back of the stage! The seats were full (and no one remained seated!), and the standing was more than full, I think there was more than 5000 attendees. 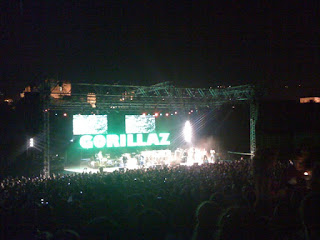 Music played
From the playlist, there was Stylo, On melancholy hill, Superfast JellyFish,  Kids with Guns, and my favorite two that were performed last Clint Eastwood and Feel Good Inc. What an amazing feeling to finally get to hear the famous laugh! HA HA HAHAHAHA...

White Flag and the Syrian orchestra
White Flag from their latest album "Plastic Beach" was performed with the collaboration of the Syrian Orchestra who in my opinion did a great job in the oriental intro of the song. They also performed a fully oriental piece just prior to White Flag. And... yes there was a huge white flag flapping around the stage. 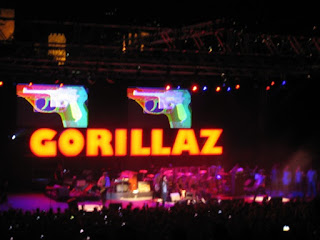 I shot several videos, but the audio quality of my digital cam is very low, so unfortunately I cannot share them.

Boooooing the Syrians, seriously?
When the nice lead member of Gorillaz mentioned that they're very happy to be performing in Lebanon, everyone WOOOOOOed... then immediately afterwords he continued that they're also happy that they'll perform in Syria as well (trying to convey how happy they are that the Gorillaz are in the Middle East for the first time), people BOOOOOOed loud for about 4-5 seconds.... I was really really really ashamed. And to think the name of the song is White Flag, how ironic.

This is music people, let us leave our prejudice, stereotypes and complete and utter silliness out of it.

Gorillaz to play in Damascus on Sunday July 25th
People in Syria, ENJOY! You're going to LOVE it. It was one of the best concerts I've ever attended.